Fundraising Concert for the Left-behind Children in China
​
On October 22, 2017, Shin Shin Educational Foundation Youth Group and the Youth Choir held a fundraising concert called "Let Love Stay" for the left-behind children in China at the De Anza College Visual and Performing Arts Center. The audience included over three hundred people. We raised over ten thousand dollars. In addition to these performances, China's ambassador in San Francisco sent congratulations to Shin Shin Educational Foundation in response to this concert.
There were three sections to the concert. The first was called "Youth's Dream,” the second was "The Desire of Love," and the third was "Let Love Stay." These three sections portrayed the strengthened desire that left-behind children in China had for love in their lives again because their parents had left them to work in large cities. One moving performance was the "Let Love Stay" group recitation that was paired with a slideshow of pictures in the background. It told the story of American students who went to Shin Shin schools in China and participated in the summer outreach program to help the left-behind children. 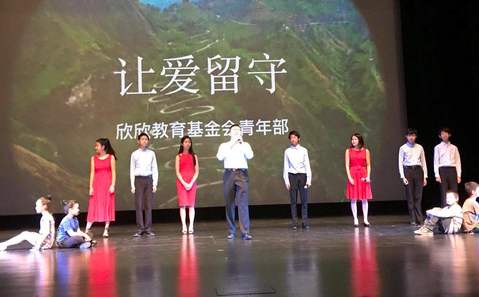