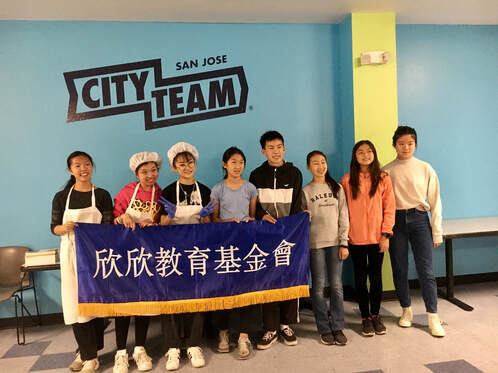 Not only for one day, but for two days in a row I volunteered at the City Team organization with Shin Shin Youth Group. I am still amazed how City Team has been serving the poor and the homeless for more than 60 years. What an incredible job they have been doing!

Today, I volunteered for a total of five hours in the afternoon. My first job was similar to what I did the day before, wrapping napkins around sporks and then tying a piece of paper around them. After about 30 minutes, my group working on the utensils was switched to help with the fruit preparation for that meal. We split up, with one half cutting cantaloupes and honeydews, and the other half peeling oranges. Finishing that task, we were given Diet Pepsi's and a short break.

Our next assignment was grating cheese. Eric and I competed in a race against Alex, to see who could grate the most cheese in the least amount of time. Soon, we had filled a whole container full of grated mild cheddar cheese. Lastly, we had to prepare the first round of plates. In an assembly line, we piled fruit, vegetables, salad, spaghetti, garlic bread, and some pie onto plates and placed them at the front of the counter. In an instant, we had filled every available space with the warm, colorful plates. Finally, we had a rest while waiting for people to arrive.

By 5:00 pm, there were tens of people coming for dinner, and we were making and passing out plates by the dozen. When the amount of people in the line trickled down to one or two people, we prepared for seconds. Like before, in an instant, we were again spooning piles of nutritious food, whether it was pie, salad, or spaghetti, onto their trays. Before we knew it, almost all the food was gone. When the last people came up, we gave them the only food left, which was some whole apple pies and cinnamon rolls. At the end, I was exhausted, but happy that we could be part of City Team’s ministry to help all these people! I think there were at least four hundred people in need that were here today. Of course, the icing on the cake was that we could bring some of the apple pie back home to enjoy.

I hope to come back every month to volunteer at City Team and help my community!